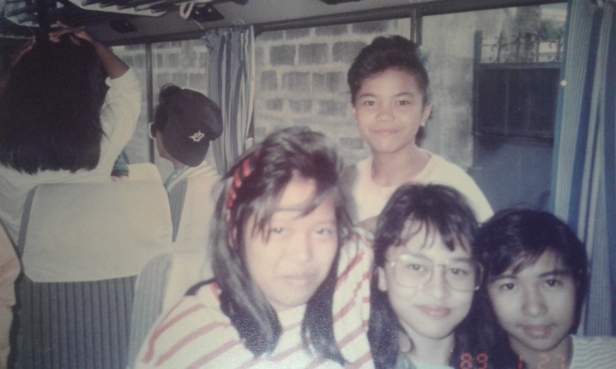 School of the Holy Spirit

My classmates were very excited to go to the field trip today. We went to the Coke plant in Laguna and saw how they manufacture the softdrinks. It was pretty cool. Then we had lunch and stayed at a hot spring resort and some of my classmates took a dip in the swimming pool. It was the first time most of us in class rode a school bus together, all 52 of us girls together in First Year Buhay, so just imagine the riot we made. Fiona and Tinee danced to Paula Abdul, doing their moves in the narrow middle lane while all of us cheered them on.

I almost didn’t go because Aba forgot to sign the permission slip again, like he always does. He’s good at driving cars and talking politics and business to people, but just doesn’t relate well to other mothers. I mean, he can talk to them, sure, but not in the way you do. If you were here, you would’ve called up my classmates’ mothers and talked about this trip days before to make sure all the girls are safe and the trip is well documented. I would’ve been a little embarrassed because you’re more outspoken than the others. I really wish no one would talk about me or even bring me up in a conversation, but with a mother like you, how can I not be a topic of conversation?

The mothers of some of my classmates were there this morning at the send-off. Some of them didn’t bother to take a bath as it was too early in the day, but I guess you would have been different. Not only would you have taken a bath, but dried your hair, put on freshly ironed clothes and even put makeup on. As you know, I’m really very shy, but when I see you so pretty, so calm and confident with the rest, I get so proud inside.

I miss you so much.

It’s nice to have some of my classmates for company today. I’m not yet friends with all of them. Most of them attended grade school together so they already know each other from way back. At English class one time, the most popular girl in class got so annoyed with me when I corrected her grammar. She was trying to write “You feel welcomed here” while I was saying to remove the “d” in welcome as it’s not a verb. Because of that, her friends got annoyed with me as well, and that’s already half of the girls in our section.

So here I am, sticking to the few who didn’t get annoyed with me. On the left, with the striped shirt and teased hair, is Katsy. On my right is Claire. And above us, the one standing is Nikka. She’s like the bridge to everyone here as she’s been here in school for a long time. Also, she’s always on the honor roll. She sings very beautifully too (she’s a soprano one).

Last October, there was a Marian songwriting contest in school, and I joined (because writing is the only thing I know how to do in this world, right?). I know I’m not Catholic, and everybody in class knows, but it doesn’t matter. All I have to do is write a song about Mama Mary.

I’m really shy with everyone else, except with Nikka, for some reason. She’s very warm and accepting, and I’ve never seen her frown or look sad, ever. Someday if I write a play or a movie about an angel, she’d definitely be in it, she’s just so perfect for the part. I mean, just look at her. She’s so approachable so I just went ahead and asked her if she would sing my song because I’ve heard her sing during Homeroom and during first Friday mass. She said yes right away and then suggested we sing it with harmonies. Then she invited a few others to do the soprano 2 and alto parts. I invited Katsy and Claire but they quickly said no because they say the frogs would quickly multiply in the swampy area near the auditorium if they start singing.

Anyway, we ended up winning second place and that’s why Nikka and I are friends now. Well, she’s friends with everyone, but I like to believe we share a special bond with music. The fact that she uses her heart and soul to make my words come alive is really, really special. She really loved that song about Mama Mary. Here are the lyrics:

She shone like an angel when no one was good

She cried like a woman but her tears were for God

She understood every sin of man no matter how bad

Mama Mary, pray for us

And set us free for all eternity

Our Mother, Our Queen

Oh I don’t know where I’ve been

I don’t really know so much about Mama Mary, so when I wrote this, I tried to think about you, Mama. I thought of the pinakbet and alugbati, the experimental seafood pasta, the sinabawang sardinas with lettuce that you used to cook for us. When I wrote the song, I thought about the many times you got frustrated with me for my laziness in doing housework. I also tried to remember the few times that you did cry because of a very serious problem you wouldn’t share with us. You kept all the bad feelings to yourself and shared only the good feelings with us. And I guess that’s why I was able to write the song about Mama Mary.

I miss you so much.

I’m only 12 years old now, and even if I only live up to 40 years old (which they say is when life truly begins) that’s still 28 years of you not being around for me. There are so many milestones I would’ve wanted to share with you, not counting my graduation in four years, my going to college, my first job, and if I get lucky, my 3-day Muslim wedding before I turn 30. Little things like this, new friendships, new songs, new beginnings on ordinary days, are just as important as the popular milestones, and I wish I can talk to you about it while we’re eating beef noodles at Joe Kuan or shopping for clothes at Isetan. It’s not easy being the new girl in school and an old girl like you, so to say, would’ve been able to teach me so much about learning to belong.

Okay, I gotta go. I still have class early tomorrow so I must turn in now. Will write again soon. I love you so much, Mama.